The county team participates in several matches throughout the season.
There is usually an early season training session and/or friendly match, for example the Purples Match at Bisley.

Organised by the English Twenty Club. Team members must be eligible for England and members of the English Twenty Club.
Regional Heat: (Northern Region) Held at a northern range in May/June
Team of 8: 2 & 10 @ 300, 500, 600 yards. (Match conditions and distances may vary depending on the chosen range).
Teams in the Northern region: County of Lancaster, Cheshire, Northumberland & Durham, Yorkshire

The winner of each Regional Heat (six in total) competes in a final at Bisley at the start of the Imperial Meeting.

Held at Bisley in June, organised by NRA of UK

Astor County Challenge Trophy (Regional Heat)
Held in the early part of the season a regional range
Club teams of 6. 2 & 7 @ 300, 500, 600 yards (Match conditions may vary according to the chosen range)
The winner of the regional heat competes against other regional heat winners in the final at Bisley.

This beautiful silver shield (approximately 3 feet in diameter) was originally a match between teams from Combined Army Units and Yorkshire Rifle Clubs. The Territorial Army competed against Yorkshire clubs up until the early nineties. Now Huddersfield, Sheffield and Leeds take part in the match.

The Bingham Shield competition also has a Team of Eight cup for the nominated top 8 in each team, and an individual trophy for the highest individual score. The original Bingham Shield is now looking for a permanent home, and a wooden replica is presented at the match. 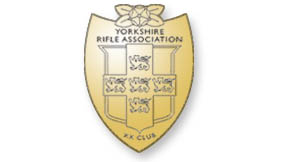